Tribute Paid to Dr. George Robert Grasett who Fell a “Martyr to his Duties” Caring for Famine Irish in Toronto 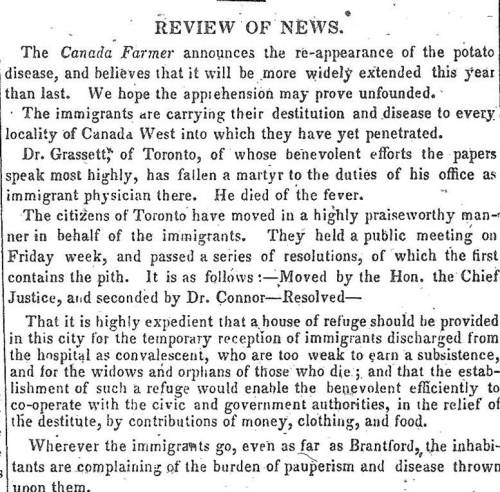 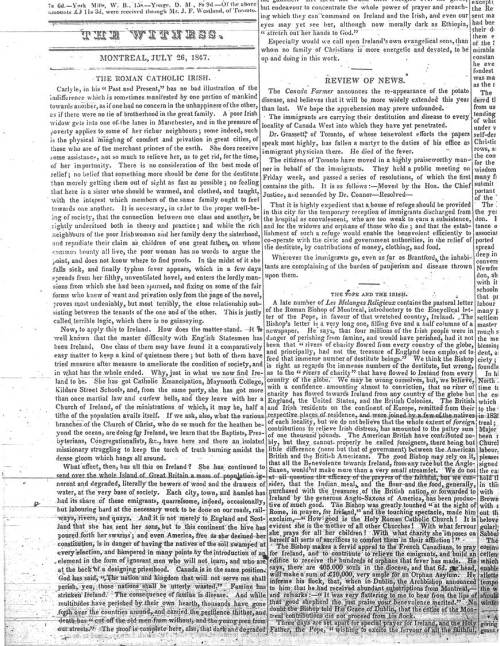 In the summer of 1847, at a time when the City of Toronto had a population of no more than 20,000 inhabitants, 38,560 Irish migrants landed on the city’s waterfront. The administrative powers of Toronto mounted what would have been a gargantuan task to assess, process, and filter this number of people through the city and onwards to their destinations. At the center of this effort was the City’s medical profession, which had to attend to the those afflicted with Typhus, an incurable and often fatal illness which was rampant amongst the migrants.

Dr. George Robert Grasett was a medical professional with a drive to help those less fortunate than himself. In addition to his own practice, he was active with the city’s House of Industry, and a founding member of the Toronto General Dispensary, which provided “medical and surgical advice and medicines to the indigent sick.” In June 1847, he secured the appointment of Chief Attending Surgeon at the newly opened Emigrant Hospital. The Emigrant Hospital had been established to serve the thousands of typhus-ridden Irish who had fled famine in Ireland and arrived in Toronto in desperate need of medical attention. Less than a month after his appointment on the 18th of June, Grasett succumbed to the very illness he had dedicated himself to treating on July 16th. Grasett’s obituary praised him for his unceasing devotion to the “amelioration of the sufferings of his fellow men, irrespective of hire or reward.”

Grasett was not the only medical officer to die in the discharge of his or her duty.

Nurse Susan Bailey, only 32, died in August 1847 of the ‘fever’. Though we have much yet to learn about Bailey she is nevertheless representative of those medical workers who put themselves in harm’s way in the treatment of the sick and dying in the summer of 1847.

The third person to be commemorated is the emigrant agent Edward McElderry. McElderry was responsible for coordinating the initial reception of the destitute and often gravely ill Irish migrants who arrived each day by the hundreds in Toronto on Dr. Rees’ Wharf. Like Grasett and Bailey, McElderry succumbed to ‘fever’ on the 29th October 1847.

These three notable individuals played a pivotal role in a period of great transition in Toronto and in Canada. The essential medical and humanitarian service they provided to the newly arrived and desperate Irish migrants laid the foundation for the Canada we know today. These three people not only aided the influx of Irish migrants who became the ancestors of modern day Canadians, but also established a heritage of kindness to those less fortunate than themselves that carries on to this very day. It is with this in mind that Ireland Park Foundation wishes to remind those who pass this park that the sacrifice of these three individuals is not just the legacy of the past, but a legacy that enriches our present and inspires our future.

The Irish Diaspora Run 2016 seeks to highlight the historical circumstances that forced Irish emigrants of 1847 to board the infamous coffin ships to Canada, whilst also paying tribute to those Canadians who cared for the typhus-stricken Irish, and connecting those who are a part of Irish Emigrant History or who simply take interest in Irish History and Culture.

Grasett Park
Ireland Park Foundation seeks the ideas of professionals and students of architecture, landscape design, and environmental design who would like to share in the creation of Dr. George Robert Grasett Park.
grasettpark.com