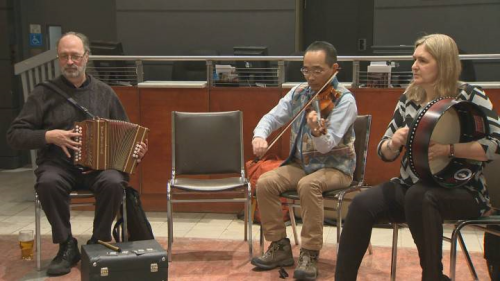 A special opening reception at the Centaur Theatre for the “Saving the Famine Irish” Exhibition, Monday, April 11, 2016.

MONTREAL – It is a story of survival and compassion.

The exhibit comes from Connecticut’s Great Hunger Institute at Quinnipiac University, which hosted the exhibition from March 17, 2015 until March 17, 2016.

The exhibit tells the story of the Grey Nuns, who helped sick Irish immigrants landing in Quebec after they fled the famine during the summer of 1847.

“The story of the Grey Nuns and of the other religious orders who helped the dying Irish immigrants is one of kindness, compassion and true charity,” said Christine Kinealy, founding director of Ireland’s Great Hunger Institute at Quinnipiac.

Kinealy is also one of the curators of the exhibit.

“Nonetheless, almost 6,000 Irish immigrants perished in the fever sheds of Montreal,” she said.

“They had fled from famine in Ireland only to die of fever in Canada. This is a remarkable story that deserves to be better known.”

The foundation hopes the exhibit will help highlight the Black Rock monument – an engraved boulder that sits under Montreal’s Victoria Bridge in commemoration of the Irish famine victims.

The foundation would like to  see the monument become a green space and cultural park to honour those who perished, as well as the people who helped them during the trying times.

One Comment to “Saving the Famine Irish exhibit comes to Montreal”