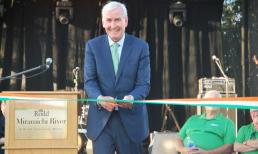 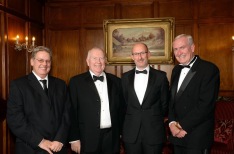 Pictured at the Ireland Park Foundation Toronto / iNua Hospitality fundraising evening in The Muckross Park Hotel were from left, Jason King, Robert Kearns, Ireland park, Noel Creedon, Inua and Kevin Vickers, Canadian Ambassador. The Ireland Park Foundation in Toronto, is a charitable non-profit organisation set up to commemorate and celebrate the story of the Irish in Canada. Picture by Don MacMonagle

My Mum’s people were Kingstons from Bantry Bay. .. Paul Kingston left Bantry Bay in 1826. And my Dad’s people, people down in Wicklow, presented me with a beautiful book with my complete family history saying that my great, great grandfather was James Vickers would have left Arklow [in 1847]. Minister Charlie Flanagan would take exception to that because he is pretty sure that I come from County Laois, and there is in fact a James Vickers  who did leave Laois in 1827.  Whether I am going to call myself a Wicklow man or a Laois man I am not too sure.

Where I am from in Miramichi, New Brunswick, it is all Irish. The names are all Irish: Shanahan, Flanagan, O’Neill, Butler, Murphy, O’Shea… [In Ireland] it feels like I have come home. It really feels like home. 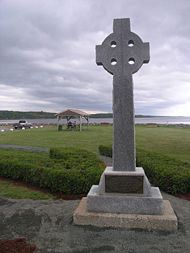 In my home town there is a Celtic Cross on Middle Island. In 1847 three ships arrived from Ireland, and there are 240 people buried on the island, Middle Island, and we grew up with that… During the Famine in 1847 was the worst year. The three ships involved , the Bolivar, the Richard White and the Loostaulk, their crews were overcome with typhus and cholera, and they had to make for the nearest port.  So they arrived at our home town.  But the river pilots refused to get on board the boats, because there were so many corpses on the decks.  When they finally were allowed to come up and dock at Middle Island, in the first week there were over a hundred people who further passed away.   It is two hundred and some odd people altogether who are buried there, in Middle Island, where we have this large Celtic Cross. 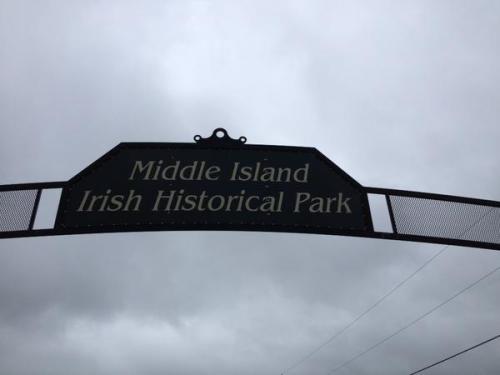 In Canada we are now on track to receive 25000 refugees by the end of February, and we may get up to fifty thousand by the end of the year. Between the forties, fifties, and early sixties in Canada we had three hundred and fifty thousand Irish people arrive on our shores.  There is an island in the St. Lawrence, Grosse Isle, with over five thousand Irish people buried on it who were overcome with cholera and typhus.  So it is a big part of our history.  Some people do not realize that seventeen percent of our population in Canada, like me, claim direct descendancy from Ireland. That would be roughly seven million people, a third again of the population from Ireland.  That is part of who we are.

Ambassador Kevin Vickers has also discussed the Famine Irish in Canada and his Irish ancestry during recent visits to Wicklow: 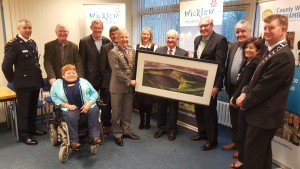 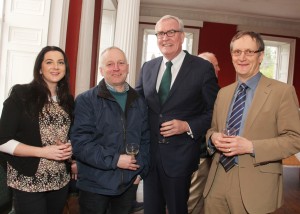 The Canadian Ambassador to Ireland, His Excellency, Kevin Vickers, was “very honoured and exceptionally humbled to have the profound pleasure to be back in my ancestral homeland,” when he enthusiastically addressed guests in the Library of Coollattin House, near Shillelagh, for the launch of the Coollattin Canadian Connection.

The event was organised by Old Coollattin Country Ltd and is aimed at promoting a number cultural, social and tourism links between Wicklow and Wexford with Canada, stemming from the large number of local emigrants who took the ships from New Ross across the Atlantic between 1847 and 1853.

“When people say ‘Welcome home, Kevin’ it always brings tears to my eyes,” said Mr Vickers, who added that his great-great grandfather, James Vickers, left here (Wicklow) in 1847. “It is a profound experience to come back home.”

Boost for tourism as Coollattin restores historic links with Canada