The Grey Nuns at Quinnipiac

Anew exhibit on the Grey Nuns hosted by Ireland’s Great Hunger Institute at Quinnipiac University opened April 1. A private event launching the exhibit took place on March 31 with the Canadian Consul General, Quebec Delegate to New England, and the Irish Consul General of New York all in attendance.

The long overdue exhibit shines a light on the untold number of English and French Canadians who provided charity and support for the thousands of immigrants who fled Ireland during the Famine. Foremost among them were the Sisters of Charity, who were more commonly referred to as the Grey Nuns. Theirs is a story of compassion and resolve during a time of great suffering and one which has been largely overlooked.

The exhibition, “Saving the Famine Irish: The Grey Nuns and the Great Hunger,” was a joint collaboration between Christine Kinealy, founding director of Ireland’s Great Hunger Institute and professor of history, and Jason King, Irish Research Council postdoctoral fellow at Moore Institute at Galway University, and the Arnold Bernhard Library. Kinealy said of the exhibit, “The story of the Grey Nuns, and of the other religious orders who helped the dying Irish immigrants, is one of kindness, compassion and true charity” adding “this is a remarkable story that deserves to be better known.” ♦ 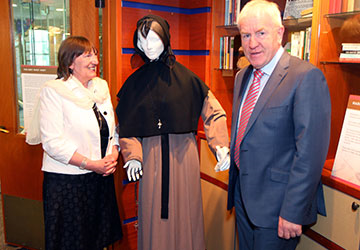 May 8, 2015 – Jimmy Deenihan, Ireland’s minister for diaspora affairs, visited Quinnipiac on May 7, to view the University’s vast collection of visual art, artifacts and printed materials relating to the Irish Famine.

Deenihan viewed the exhibition, ‘Saving the Famine Irish: The Grey Nuns and the Great Hunger,’ in the Arnold Bernhard Library on the Mount Carmel Campus. He also toured Ireland’s Great Hunger Museum at Quinnipiac University.

“Quinnipiac University is at the forefront of bringing awareness and knowledge of The Great Hunger to the wider community through the important work of the institute and the museum,” Deenihan said. “Scholars and students can avail themselves of the unique collection of resources, both written and visual. Quinnipiac is bringing the story of Ireland’s Great Famine to the diaspora in a fresh and meaningful way.”

The exhibition, hosted by Ireland’s Great Hunger Institute, tells the story of the religious orders in Montreal whose members gave selflessly to Irish immigrants during the summer of 1847 – their time of greatest need.

“The minister for diaspora affairs was very engaged,” said Christine Kinealy, a professor of history and director of Ireland’s Great Hunger Institute. “He knew all about the Grey Nuns and thought the museum was beautiful.”

Deenihan was accompanied by Christine Reen, private secretary for the Department of the Taoiseach (prime minister) in Ireland, Emer Rocke, director of Irish Abroad and the Global Irish Network Unit for Ireland’s Department of Foreign Affairs, and Fiona McCabe, Ireland’s vice consul general in New York.

“It was a fine visit,” Kinealy said. “They were very appreciative of what we do in terms of the wide impact Quinnipiac has on Irish students and forging better relationships with scholars in Ireland and with people interested in learning more about the Great Hunger.”

“It was a pleasure having Minister Jimmy Deenihan visit Ireland’s Great Hunger Museum,” added Grace Brady, executive director of the museum. “As minister for diaspora affairs, it was quite fitting for him to see the museum in an area that is home to many generations of descendants of Irish immigrants. The minister thanked us for all the work we have been doing to educate people about the Great Hunger and for showing exceptional Irish visual art.”

“Saving the Famine Irish: The Grey Nuns and the Great Hunger” Exhibit Launch at Quinnipiac University and the Montreal Irish Memorial Park Foundation

“Saving the Famine Irish: The Grey Nuns and the Great Hunger” Exhibit launch at Quinnipiac University.  The exhibit runs until March 18, 2016. 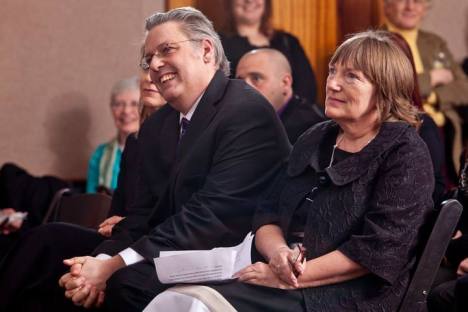 Co-curators, Professor Christine Kinealy of Quinnipiac University and Dr. Jason King of Galway University at the reception on March 31, 2015.

A copy of “The Awful Disclosures of Maria Monk”, a staple of anti-Catholic nativism published nearly a decade before the arrival of famine migrants in Canada, on view in the exhibition. 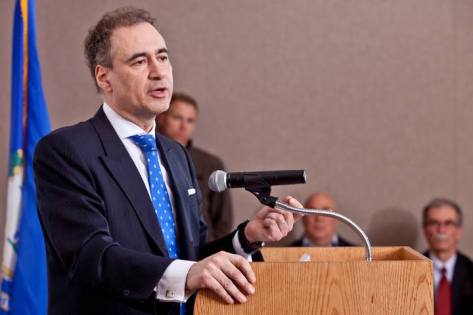 Professor Christine Kinealy speaks about the Grey Nun’s habit on view in the exhibition. 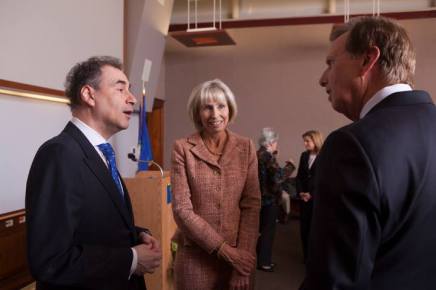 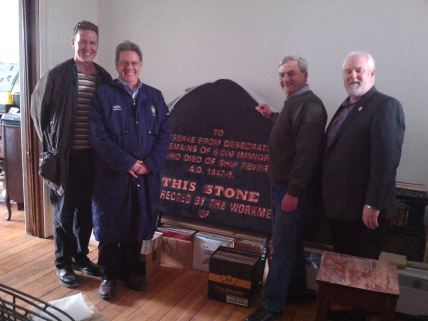